‘Sorted Books’ at The Noguchi Museum

From the Sorted Books project (1993 and ongoing)

The printed edition of this series is currently on view in the exhibition Nina Katchadourian: Cumulus, May 13–June 26, 2021, at Pace Gallery, New York. Personal libraries offer an intimate glimpse into the mind of a reader: they document paths of inquiry and learning traversed over a lifetime. Even books left unread, perhaps gifted by a friend or purchased and promptly forgotten, leave traces of aspirations or received recommendations for future thinking. Since 1993, artist Nina Katchadourian (b. 1968) has explored the libraries of acquaintances, artists, writers, and institutions as part of her ongoing “Sorted Books” project. Katchadourian carefully selects books and arranges them into stacks so that their titles can be read in sequence from top to bottom. These book “clusters,” as she calls them, are still-life photographs, sculptures, portraits, and poems that playfully reveal the unexpected connections tucked away on our bookshelves. Katchadourian continues her series with this study of Isamu Noguchi’s personal library.

From botany and beat poetry to ancient Greek art and UFOs, the range of subjects covered in the over 1,000 books in the personal library of Isamu Noguchi reveal the artist’s wide network of influence and open-ended spirit of learning. Taken together, they become a curious landscape of the artist’s mind. His books serve as a proxy for his many travels, both real and imagined, from the megaliths of England to the reaches of outer space. (Noguchi once said, “Our imagination does travel. I mean, who hasn’t been on Mars and seen it? To the artist, going to the moon was nothing new. I’ve been up there all the time.”1)

In exploring this collection, Katchadourian has found new inroads that lead both toward and away from Noguchi. In her clusters we find Noguchi searching for stones, and attempting to navigate “spaceship earth,” but we are also led farther afield, to Los Angeles in 1984, and through the macabre imaginings of a gifted child barking orders at a rabbit. With wit and careful wordplay, Katchadourian shifts contexts, makes language unstable, and renders meaning malleable. It is this spirit of openness and play, and a care for the intersections between art and the everyday, that unite these artists as an unlikely and generative pair. It is also what makes Katchadourian’s rereading of Noguchi so compelling. In a 1962 interview, Isamu Noguchi said, “I always work with whatever medium is at hand. I don’t believe in sticking to one medium.”2 This has been my approach as well, and I’ve found that deliberately working with the limitations of the materials at hand has been productive for me. My ongoing project “Sorted Books” began in 1993 as an experiment that I undertook with a group of fellow graduate students in 1993, when we took over a friend’s parents’ house in the small coastal town of Half Moon Bay, in California, and made art for a week using only what we found in the house. I got interested in the couple’s books and spent a week rearranging them on the bookshelves. The basic rules of engagement have remained the same through many iterations of the project ever since: I limit myself to a particular collection of books and by organizing them into clusters so that the titles can be read in sequence, I construct phrases, stories, poems. I think of the project as a form of portraiture.

Both through the books Noguchi collected and his writings about his own work, I was keenly aware of his own intense attention to what materials communicate. The most common misunderstanding about the “Sorted Books” project is that it’s only about language, and merely about the arranging of words. There is an absolutely elemental importance to engaging the books as physical objects: to consider height, width, heft, color, typeface, texture, gloss, damage, dust jacket. These things communicate in different ways than language can, and to me they are as big as part of how the images are “read” as the words on the spines or covers. I’ve seen paperbacks that are so banged up and mangled from reading that they look like they’ve been eaten alive, in fact, a reflection of the voracious way in which I imagined they had been handled. (Perhaps the most extreme example I’ve encountered was in the personal book collection of William S. Burroughs, where a medical thriller paperback titled Nerve had been shot through the cover, the bullet still lodged inside). I’ve also encountered libraries where the books have been treated so carefully that you wonder if they’ve ever been opened—or, perhaps, the books are there to serve a future moment when one might be needed as reference.

Noguchi’s books are kept in his two homes, in Long Island City, New York, and Mure, Japan. Adding to the complexity, during this project I was in Berlin, Germany. From my studio there, I worked with snapshots of the book spines from both book collections, pinning up color prints of them on a large wall. In this simulated library, I used my usual method: reading the book spines over and over, transcribing onto index cards the titles I thought might be useful, and then spending a great deal of time composing potential book clusters using the index cards. I sent some preliminary groupings to Kate Wiener, assistant curator, who pulled those books from the Long Island City shelves and sent me back snapshots. Since the books in the Mure library couldn’t travel, we ordered secondhand copies, matching the editions exactly, and worked with those books in Long Island City as well. The photo shoot was an eight-hour long Zoom session in Long Island City, with Kate and photographer Frank Oudeman arranging the books and making small tweaks based on my feedback as they screen-shared images I scrutinized in Berlin. I had seen Noguchi’s books in Long Island City once, but it was before I knew which books I’d be using for my project. This was the first time I’ve had to do the project remotely. It required Kate and Frank to be my eyes and hands, and to tell me not only what things looked like but felt like. Although technology made it possible to do this project in a surprisingly effective way, it was bittersweet not to have tactile contact with the books, which often teaches me so much. There is a fundamental question with every iteration of “Sorted Books” for me, and that concerns the “voice” employed in the book clusters. Do the book arrangements reflect the views and interests of the owner of the books, as if that person were talking? Or is it me speaking, but through the books? The Noguchi series leans more toward the latter, but I placed a lot of importance on including books that would point to the artist’s influences (there are five books on Brancusi, his teacher and mentor), his connection to poetry (Noguchi’s father was a poet, and Noguchi owned many books of and about poetry), and his important friendships (there are many Buckminster Fuller titles, and several books on Duchamp). I was struck by the number of books about health and fitness—something I hadn’t necessarily expected to find—and included these kinds of books in a variety of clusters. Noguchi read a lot about the ancient world, but he also collected a fair amount of popular, contemporaneous writing. Some of the most beautiful books concerned Japanese craft traditions (Origami, and the wonderfully titled How to Wrap Five More Eggs). Noguchi didn’t write much marginalia in his books, but in a paperback anthology of comical short essays (a book he didn’t get too far into), there are sketches in pen on the blank page facing the title page. They might be sketches for an Akari lamp or one of his endless columns, or perhaps ideas for a playground element. Even when reading about something completely different, it seems that sculpture was always on his mind. 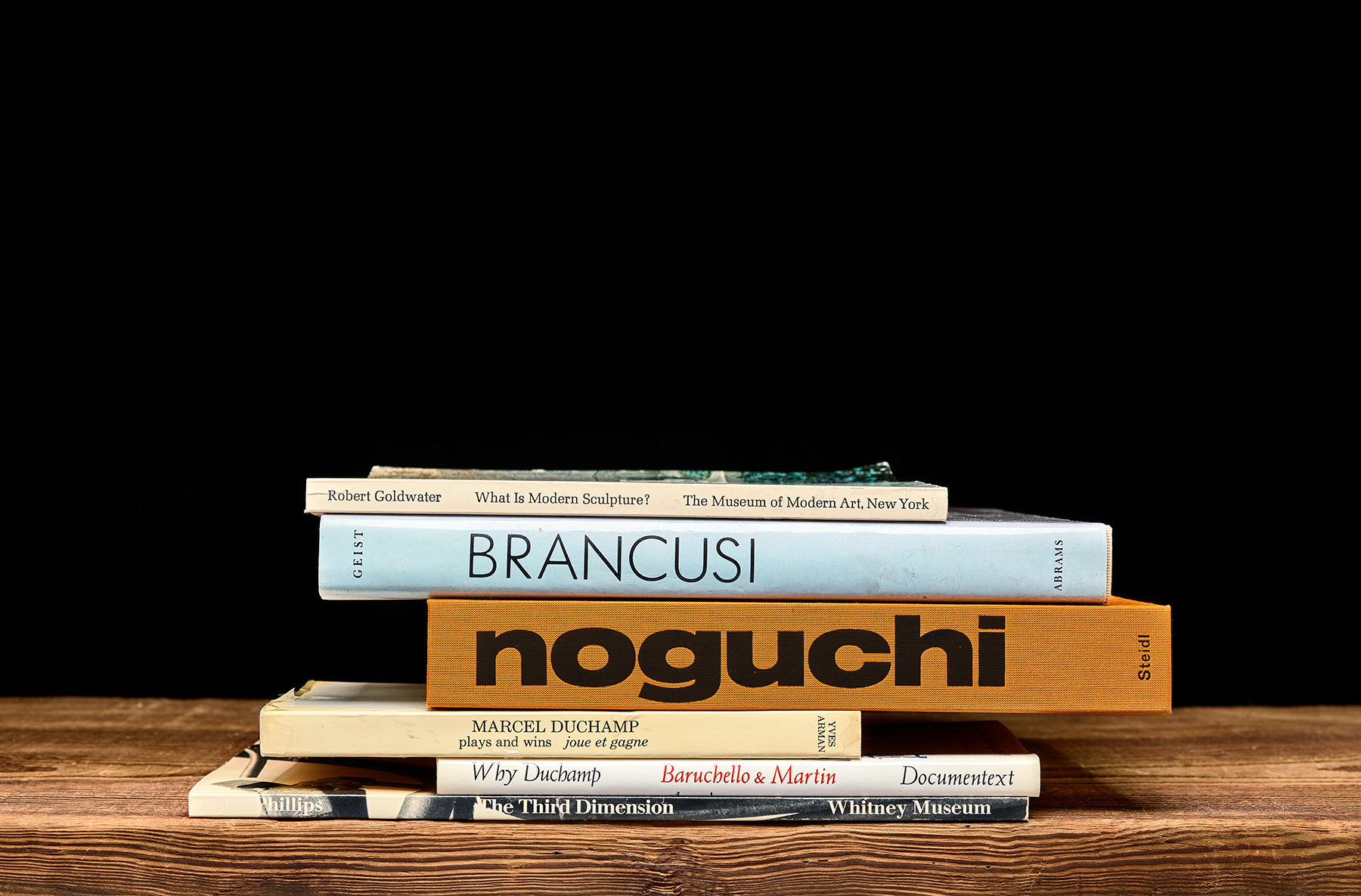 Nina Katchadourian, What Is Modern Sculpture?, from the series Noguchi, 2021 (“Sorted Books” project, 1993 and ongoing) Nina Katchadourian, This Is Japan, from the series Noguchi, 2021 (“Sorted Books” project, 1993 and ongoing) Nina Katchadourian, The Joy of Sex, from the series Noguchi, 2021 (“Sorted Books” project, 1993 and ongoing) Nina Katchadourian, This Time of Morning, from the series Noguchi, 2021 (“Sorted Books” project, 1993 and ongoing) Nina Katchadourian, The Drama of the Gifted Child, from the series Noguchi, 2021 (“Sorted Books” project, 1993 and ongoing) Nina Katchadourian, Man in the Holocene, from the series Noguchi, 2021 (“Sorted Books” project, 1993 and ongoing) Nina Katchadourian, The Poetics of Space, from the series Noguchi, 2021 (“Sorted Books” project, 1993 and ongoing) Nina Katchadourian is an interdisciplinary artist whose work includes video, performance, sound, sculpture, photography and public projects. Her video Accent Elimination was included at the 2015 Venice Biennale in the Armenian Pavilion, which won the Golden Lion for Best National Participation. In 2016, Katchadourian created “Dust Gathering,” an audio tour on the subject of dust, for the Museum of Modern Art, New York. A traveling solo museum survey entitled Curiouser opened in 2017 at the Blanton Museum of Art, accompanied by a monograph. Katchadourian is Professor of Practice on the faculty of New York University’s Gallatin School of Individualized Study. She is represented by Catharine Clark Gallery and Pace Gallery and lives in Brooklyn and Berlin.

Transcripts of archival materials are available by request to accessibility@noguchi.org. Flicker of an Eyelid: Isamu Noguchi, Ruth Page, and the Universe of Chicago