Ceiling and Waterfall for 666 Fifth Avenue

Isamu Noguchi’s Ceiling and Waterfall for 666 Fifth Avenue, New York (1956–57), which were permanently removed from the building in 2020, are currently on view as the centerpiece of the exhibition Isamu Noguchi: A New Nature, at White Cube Bermondsey, London, through April 3, 2022.

What follows provides some additional context about the history of the work and The Isamu Noguchi Foundation and Garden Museum’s intentions for its future.

To learn more about other site-specific works by Isamu Noguchi that were later destroyed or fundamentally altered, please see Altered and Destroyed.

The History of Ceiling and Waterfall, 666 Fifth Avenue, New York

In 1955 the architect Robert Carson of Carson & Lundin contacted Isamu Noguchi about reusing a design Noguchi had conceived for him for an unrealized bank project in Texas, for a building Carson was designing for Tishman Realty and Construction at 666 Fifth Avenue in New York City, across the street from The Museum of Modern Art. The construction of this building was documented in Shirley Clarke’s film Skyscraper (1960). “Nominated for an Academy Award, this short film playfully chronicles the construction of the Tishman Building at 666 Fifth Avenue in New York City. Clarke referred to this work as a musical comedy.” Criterion Collection

© Estate of Shirley Clarke
Licensed via Kino Lorber Inc. and screened with permission

Noguchi was horrified by the idea that Carson might simply reuse a complex concept he had conceived around the topographical maps used in oil and gas exploration (appropriate to a Texas bank) for a ceiling in a New York City office building.1 To his credit, Carson seems to have understood and readily agreed to Noguchi’s proposal that he apply the louver technique developed for the bank wall to the design of a ceiling appropriate to the new project and add a second major element, a waterfall.

The ensemble Noguchi delivered was meant to transform the patterned marble hardscape of the lobby of 666 Fifth Avenue into something more ambiguous, softer and somewhat natural, which it did. The sound of running water from the waterfall subsumed and transmuted the sound of traffic from Fifth Avenue, while the 114 ranks of shaped aluminum louvers (covering more than 6,000 square feet) reshaped the ceiling into a shifting “landscape of clouds”2 that brought the concept of skyscraping inside. Noguchi was not entirely happy with the result. In a draft for his autobiography, in a longer writeup about the project, we learn that he was frustrated that water splashing outside the shallow catchment trough led to the flow being turned down to a trickle.3 A decade later, in a 1978 interview, he explained that he had always felt that the ceiling was too low. “We tried to squeeze something in there, which is very bad… It was done after the building was done, so to speak, and therefore squeezed in. It isn’t right, but I mean I did the best I could. Anyway that’s how that happened.”4 But for all its compromises, the bubble he created there, outside time and space in the heart of midtown Manhattan, was a triumphant example of his ability to (as he sometimes put it) shift the environment of our awareness. In the intervening years as the building changed ownership, as the surrounding city grid shifted, and the requirements of commercial office spaces changed, several renovations significantly altered the context of Noguchi’s work. Most damaging were: the elimination of the long entry hallways from Fifth Avenue, the end of which the waterfall had been designed to anchor, when the building’s entire frontage on Fifth Avenue became retail space; the replacement of the strongly geometric, patterned marble interior with generic, uniform granite and wood surfaces; and the decommissioning of the waterfall (which had always splashed outside its catchment basin) for liability reasons. Other changes, such as the replacement of the original incandescent lighting system that floats above the ceiling and provides a backdrop as well as illumination with a more efficient and uniform reflected fluorescent setup, were less problematic. Ultimately, in fall 2020, Ceiling and Waterfall, 666 Fifth Avenue, New York was permanently removed from the building. As stewards of the artist’s legacy, The Isamu Noguchi Foundation and Garden Museum strongly advocated for two years for the work to remain in the lobby, even though it was compromised by the previous renovations. However, the owner of the building and the work elected to exercise its right to remove it.

Ceiling and Waterfall were documented, deinstalled, and catalogued under the oversight of The Isamu Noguchi Foundation and Garden Museum, and the components of these installations were donated by the owner to the Museum without restriction. The Future of Ceiling and Waterfall, 666 Fifth Avenue, New York

The Isamu Noguchi Foundation and Garden Museum accepted custody of the components of Ceiling and Waterfall, 666 Fifth Avenue, New York in order to give them the possibility of a future. We believe that they deserve the opportunity to find a new life in the public sphere—that this is preferable to their disappearance into permanent storage. Asked about his complicated collaborations with architects, Noguchi once said, “I try not to compromise. I adapt,”5 and if you want to have a legacy in the built environment, that is really the only conceivable perspective.

By exhibiting Ceiling and Waterfall at White Cube Bermondsey, The Isamu Noguchi Foundation and Garden Museum hopes to identify collaborators working on a new or existing building who recognize an opportunity in the challenge of adapting Ceiling and Waterfall to a new space, together or individually, with the Museum’s participation and official approval, guided by Noguchi’s original premises and intent.

Noguchi’s original work was destroyed by its removal from its original context. But we are determined to make Ceiling and Waterfall, 666 Fifth Avenue, New York a meaningful test case in a broader conversation about the afterlife of site-specific works. The churn of commercial real estate is not going to end anytime soon. Site-specific works are going to continue to lose fights to remain in their original contexts as those contexts change and disappear. We believe that the possibility of a second life for these works should be positively asserted. We are also committed to ensuring that any future plan recognizes, honors, and in some real way perpetuates the legacy and understanding of this important artwork, an iconic piece of New York City’s architectural history.

A 3D tour of the lobby of 666 Fifth Avenue, New York, documented just before the work’s removal in 2020.
Photogrammetry & Laser Scanning by SOE Studio © INFGM/ARS

Isamu Noguchi: A New Nature is on view at White Cube Bermondsey, London,
through April 3, 2022.

Transcripts of archival materials are available by request to accessibility@noguchi.org. 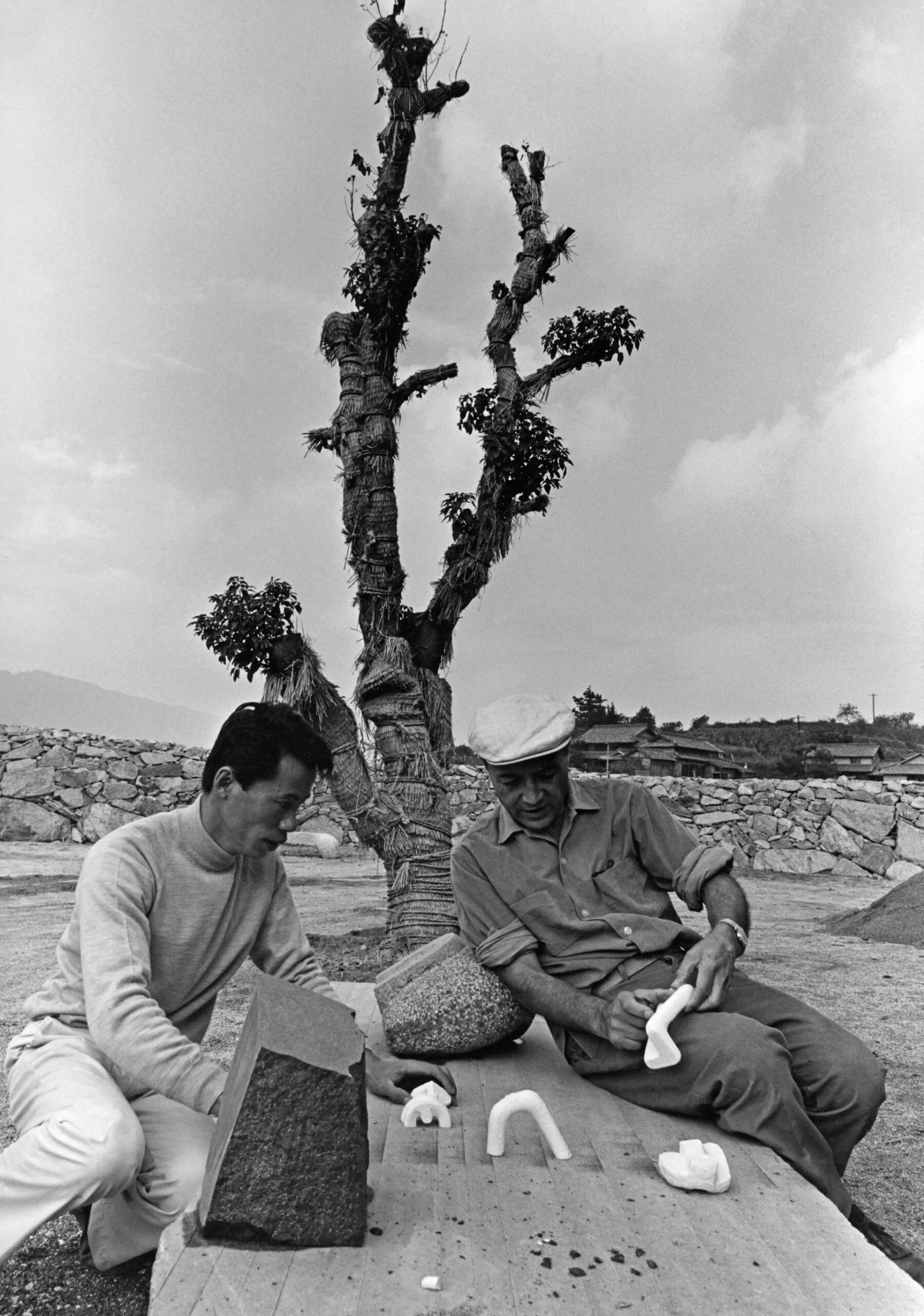